Image via WikipediaYou hear it all the time. To be successful in today’s economic climate, you have to be efficient with your marketing. This often means using the Internet and social media as a big part of your marketing plans. I like using Twitter too quickly reach lot’s of people in a very short period of time. I also like the viral nature of twitter where people re-tweet other post giving your message a life of its own so to speak. In this article, we will explore five powerful yet simple techniques that will attract twitter members to follow your address. Follow these rules and reap the benefits of successful twitter marketing.

Powerful technique #1, Tweet Often But Relevant
A golden rule of social media is that people look for useful, relevant and entertaining information. Your posts have to fit into these three categories. Even if your selling something, your post has to be perceived as either useful, relevant or entertaining or you’re your gone. Break this rule at your own peril.

Frequency is also very valuable because it keeps you top of mind. Combining frequency with a steady stream of useful, relevant and interesting tweets, will quickly build a following, just because of all the activity. 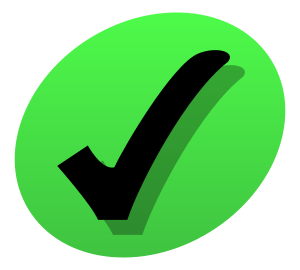 Image via WikipediaAlways be cognizant of what you write. Once something is posted, it can’t be undone. You can get away with a lot of short hand on twitter but netiquette rules still holds true. Remember that being nice begets nice. Being courteous begets courtesy back. If you post often and useful information you’re following will grow. On the other hand, if you post commercials, controversial links, curse a lot and act in a contemptuous way, expect the same in return.

Image via WikipediaAny time you post a tweet, also post that tweet to other social media venues. Link (or post) your tweets and re-tweets to Facebook, LinkedIn, Google Buzz and any other social site that is linkable. This allows you to leverage your communications and cross-pollinate several social media mediums at once.

There is one draw back to this technique. Make sure that your tweets are relevant to your audience. Send the wrong or irrelevant information to all of your social media sites at once can cause you to be un-friended and un-followed just as quickly, especially if you are posting your commercials’. Social media participants look for useful, relevant and entertaining information. Break this rule too often and it will cost you. Remember that once something is posted, it live and can’t be easily changed.

Powerful technique #4, Make Your Content Searchable
Another way to get more leverage is to use hash marks. This will allow others to easily find your tweets. Tagging information in your tweets with the # sign, (i.e. hash mark sign) makes that word searchable and increases the number of people who will likely see your tweet. For example if you want the word ecology tagged, you would write it like this, #ecology. Using hash mark tags is a powerful way to reach people out side of your current following. Us them with every tweet and watch new followers flock to your address.

Powerful technique #5, Use Thank You Tweet to Increase Re-tweets

Image by bertboerland via FlickrSpeaking of re-tweets, here is another simple yet powerful technique that produces big results. If someone re-tweets your post send them a thank you tweet. If you're using, “Tiny- URL” or “Bit-ly”, you can easily track who is re-tweeting your posts. However, the important part is this; it’s thanking them for re-tweeting that gets you more coverage. The more you thanks people for re-tweeting your post the greater the likelihood they will do it more. This is a great example of how common courtesy, (i.e. thanking people) goes a long way in gaining respect, trust, creates leverage and produces a greater following on twitter.

There you have it, five powerful techniques that will attract and keep twitter follower without you having to go out and buy some fancy programs or pay a consultant to build your network. Use these techniques often and religiously and you too will soon be seen as a tweet mister worth following.

That’s my opining, what’s yours?

Hector Cisneros is an entrepreneur/businessman with over 25-year experience. He is a 18-year veteran of BNI, and was BNI Director for six years. He is a firm believer in the BNI philosophy of "Giver Gain". Currently, he manages three businesses, writes and coach's business people in the art of Word of Mouth, Social Media and internet marketing. He has several intl. published articles covering word of mouth, social media marketing and how to improve your 60-second presentations. His new book "60 Seconds to Success" is aimed at helping business people make great first impressions and make more money through referral and word of mouth marketing campaigns. To learn more about Hector Cisneros, Social Media, Internet Marketing and Word of Mouth Marketing visit http://www.60secondstosuccess.com or the Networkers Apprentice Workshop at http://networkersapprentice.com/ To contact Hector, write him at hecisneros@gmail.com

Thank you for reading my blog and for keeping the discussion going. If I can be of service let me know. Sincerely,

Get your copy of 60 Seconds to Success

This book is not about a get rich quick scheme, its about how to be successful 60 seconds at a time.

You will learn how to use powerful words that compel and motivate people to action. You will learn my methodology on how to construct your messages so that your referral partners will be able to repeat and pass your message on for you.

You will also learn how to keep your message fresh so that your listeners will be compelled to hear your message, even after hearing it many times.

If this sounds interesting, read Dr. Ivan Misners testimonial. To check out the book, click on the link for the FREE pre-view copy. 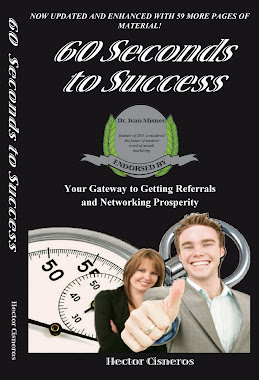 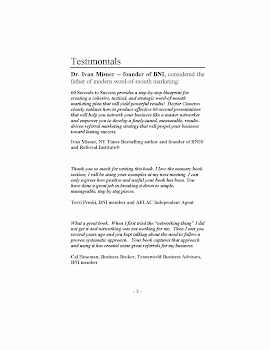 Endorse by Dr. Ivan Misner and others